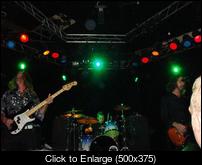 The New Hotness, out of Arcadia, California, was entered into this year’s Emergenza battle of the bands contest (www.emergenza.net). The contest was broken up into smaller competitions throughout the world taking place in the globe’s largest cities. The competition consists of several gigs. About 8 bands play per show. After each performance, a vote is taken by a count of raised audience hands. Whoever received the most counts per show went on to the next round. This show was the Emergenza finals for the Los Angeles area. I was not able to make it to the show but fortunately Erik Newton (guitarist and vocalist for the New Hotness) was able to hand me a DVD copy of their performance at the show. First and foremost, the New Hotness are awesome live performers: I haven’t seen many local bands with as much clarity and energy as the New Hotness can dish out. Erik Newton, John K (bass), and Jared Summerell (drums) commanded the stage in all white retro style uniforms consisting of white buttoned down shirts, white pants, and white shoes (the image above was taken at the band’s previous Emergenza performance.). Immediately following their introduction by the Emergenza officials, the band headed off into a solid track that fired up the crowd. Flashing red, blue, and green lights reflected the energy of the band as well as the energy of the audience. Erik Newton is a great lead vocalist never hesitating to get some crowd participation. The audience backed Erik’s lyrics for several songs during their performance. Each song had an incredibly catchy rhythm that anybody could find very easy and fun to get into. John K and Jared Summerell are awesome on bass and drums respectively projecting an intense rhythm while Erik got down on his crowd pleasing solos. Because of time restrictions, the New Hotness only played for about thirty minutes. However, at the end of the night, the New Hotness received the most crowd votes winning the Los Angeles Emergenza finals! As a result, the band will be flown to Germany to participate in a large music festival which is in part run by Emergenza. I was sorry to miss that performance but I’m very eager to catch their next gig as soon as they return from Germany.