Our night started at JJ's Alley Bar for some pizza before the show started. After eating we headed to the Wormy Dog Saloon. We got there a little bit early which gave everyone a chance to hang out and chat a bit and have a few drinks. Before we knew it SRB took the stage. Samantha's strong singing voice was the first thing to stand out along side with an original yet comfortable style and sound. This band seemed like they have been performing for years, they have great timing with Milton Toles on drums keeping everything on time with good beats and good timing, then we have Chris Brackett on Guitar and Eric Melton on Bass and of course Samantha Rose on main Vocals and Guitar who ties the entire band together. Two of my favorite songs of the night were two orignal songs written by Samantha herself called " My Life" and "Little Girl" in which I would say will be her first big hits . They also played some great covers such-as Lanyard Skinner, Atlantis Morissette, The Cranberries, Oasis, The Outfields, Gnarls Barkley and Michael Jackson all-in-which were fun covers because it got the entire bar singing. They played two sets for the night and played really well.

I got a chance to talk with Samantha's dad and hear a little back story about Samantha and how she got started in making music. Sam was big into softball and about 2 years ago was in a car accident which caused her to not be able to play ball. Her next hobby was singing. She started singing and taught herself how to play guitar. She surprised everyone with here unbelievable singing voice that hasn't been let out until now. She got a guitar about a year ago for Christmas and it's been nothing but up hill from here. With a few lessons but mostly self taught she has come such a long way in such a short period of time. 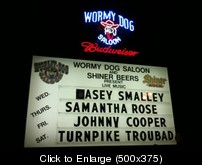