Featured Artists: Mike Park; Genre: Alternative;
Why did you start the plea for peace? It was a way for me to do something with music and activism, especially at the time I felt there was such a laul in the music work, this was happening in the late 90s when they did it with metal bands like limp biscuit, it's like all testosterone filled music, where the peace and unity of woodstocks original motto, and it's like I grew up in northern California San Francisco area going to punk shows, going to rock against racism shows, seeing the dead kennedy's, seeing bands that had an agenda, of basically some kind of message, and it's like wow was it lost and that's the idea, lets do something like that again, lets start plea for peace.

What youth center is it that this bike tour is trying to fund? The city I live in and grew up in (San José, CA), and that's a huge city, 10th largest city in the US, and the fact that we have no all ages venues for kids is really sickening, so that's the place where were going to be working towards opening up this music center.

How about asian man records? Asian man records is an outlet for me to release my own music and an outlet for friends and musicians that I have met and will continue to meet. It's a way for me to be in the music business with my own rules, instead of compromising to to the belief that this is a set way of doing things and avoiding the capitalistic endeavors of most music labels.

What got you interested in doing all of this? What got me interested was people I never met, other bands, and their big influence on me was the discord phenomenon of the east coast, seeing what fegozia has done, and what discord has done as a label, and their politics and how they stay true to their beliefs, that was really the big step in terms of me doing asian man and doing it the way I wanted to model my self after.

What were some of your favorite bands going up? Growing up probably one of my favorite bands was seven seconds, who is ironically playing down the street tonight, I loved them so much they were just my favorite band, I love bad brains, oingo boingo, devo, the specials, bad manners, two tounge ska that came out of england like madness, iongle speed, some bands like that.

What other bands have you been in? I have played in several bands thru my life, a lot of garage bands, probably too many to name, the only that was really a real band in terms of touring and putting out a record was skanking pickle, and we did that for 7 years and it was just time to stop at least for me I had lost the passion and I didn't want to go thru the motions of putting up a front on stage.

Where would you like to play the most? I have played a lot of places I wanted to play, I like playing a lot of the non-profits, like the 924 Gilmore Streets of the world, like in New York, I have played the abc no reo before it closed, I have no idea, I think I would like to play maybe like Austin City Limits is more of a country show/jamboree in Austin Texas.

What was been your best show? You know I love gilmore street, I love what it stands for, I love that in the year 2006 they can still charge $5 for concerts, and they don't care that they have to compete with other clubs, to get the talent it's just awesome, and that's the place I always feel at home at.

How was your first show? My first show was probably in 1984 and I was in a punk band called psyeactric disorder, and it was in a church basement, and its kind of a blur but I can remember I had been playing guitar for maybe a month, I can't imagine what it sounded like. What's really exciting is I just found some practice tapes off of a boom box just recording, I'm contemplating releasing it, it sounds so bad but it's awesome, so maybe i'll put it out one day.

What makes a show the best? There's a lot of different factors and ingredients of what makes a show a success. Weather it's 10 people or 10,000 people, it's if the people care. If your going for apathy, to apathetic minds, it's like "what am I doing up here?" But when There's energy its reciprocated.

Who would you want to open for? I want to play with Thea Miakais new band The Evans, when they toured earlier this year, I tried to get on every show, I called all the promoters my self and I knew most of the promoters, but he wasn't bring out any opening bands so I failed, but maybe one of these days I will get to play with him. I would just like him to see me play and kind of get his feed back on what im doing.

How many tours have you been on? I cant even count, it's been hundreds, I have been touring since the late 80s, I don't even remember.

What inspires most of your lyrics? I think it's a different number of things, it can be stories in my life or my past, things I see, stories I hear, it varies, mostly their just stories.

How did you come up with the title for your latest CD? I came up with the title "north hangout falling" first of all its the name of a song, and I thought it would be appropriate to make the album that because it would raise questions because no one knew what hangout means. Say I called the album "flowers are pretty" its like, "Oh," everyone knows there pretty, but "north hangout falling" I thought would raise questions with other people, and maybe they would look into what it means. What the album is about is a lot about the Korean war and the 38th parallel, which the 38th parallel is what divides north and south korea, and the hope that we can have both those two countries become one unified country again, that would be an ultimate dream for myself and a lot of families that have not seen their families since the korean war.

How long did it take you to make this album? It's different with every project, I think with this one from rehearsal to recording, maybe like two and a half weeks? It's pretty short, I'm very impatient, when it comes to recording, I just want to do it and get it done.

Who runs asian man records? Just me, and one other person, for the first nine years it was me and this woman named Miya, and earlier this year she went back to grad school, so right now its just me and a new person named Skyler, and that's it.

Where has your best show been? Ah, I don't know, its hard to say, this is a new venture for me plus playing acoustic is totally new, I think I have only been doing it for about a year and a half, I'm just kind of getting my feet wet, and I have had some really good shows, I have been really fortunate to open up for some really big bands, so it's really hard to judge when your like "wow look at all these people they're all clapping" that's great but its like "oh there there for them, and there just being nice to me" but you know, home, playing in the bay area, and San Francisco/Berkley area is always the best.

Since you do a lot with up-and-coming bands, do you have any advice to any bands that are trying to make their way? I think bands are so jumpy in terms of wanting to have success, and what is the success you want? What is the purpose your playing music? That's what baffles me is like, if your in it just to become famous and make a bunch of money, it just seems so fake to me, with the bands it's like just have fun, if your looking for that success, more than not, its not going to happen. The bands who usually get discovered are the bands that are just playing music, and word of mouth hits about them and the labels look for them. It's not the other way around, in most cases.

How did your parents feel about you playing music when you were younger? Oh when I was younger it was great, they wanted me to play classically, but as soon as I wanted to do it as a profession than no way, it was not something they were happy about.

Where can we get your new CD? I would like to think its available in every mom and pop punk rock record shop, and if not than you can definitely mail order, which is still the best d.i.y. distribution. I know It is available on Itunes, and yeah, mail order.

What instruments do you play? I play saxophone and guitar.

Is running asian man records, plea for peace, and music the only thing you do? Pretty much, I do a lot of community service work. I work at the blind center on wednesdays. Soup kitchen on tuesdays and thursdays, and umm hang out with my girl friend.

Anything to say? If you have been supporting me thank you so much, and for those of you who are not familiar with me If you'd like to hear some music just go to my website MikeParkMusic.com hear some audio files and see if you like it. 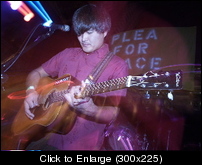