Big smile magazine was at warped tour '11 in Cincinnati. There we had the opportunity to meet MC Lars and his partner in crime Weerd Science. While doing an interview, he was nice enough to give us his mixed tape which can be downloaded for FREE on his website mclars.com. The first thing that caught my attention being a Pittsburgh boy, was his version of "Black and Yellow." He said neither Wiz nor his lawyers have yet to contact him.

You can really tell he is having fun and this track was made for no one but himself. Throughout this whole album the listener can tell how much MC Lars loves what he is doing and it makes the listener love it too.

The second thing I noticed was the alien theme in many of his tracks such as "Lars Attacks." When asked about these tracks lars said it wasn't based on any real experiences but is more of a spiritual thing. He believes in extra terrestrial, weather they are aliens or angles.

On this tape he worked with many well known and lesser known artists. These artists include his father, KRS-One and many others. When ask what his favorite artist to work with was he said KRS-One because he is such a legend.

Thanks for reading BigSmileMagazine.com and feel free to post your thoughts as comments below. 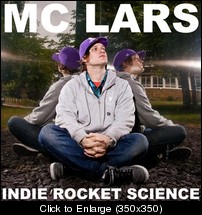