I love underground hip hop and it seems like you have a lot of drive and self motivation, were you always like that was or was it something that has grown with your music?"It's just a trait ingrained in me. The truth is

I'm a sore loser, and that gives me the drive to stay focused and motivated. When I do lose I try to keep the tantrums to a minimum. (haha)"

"I just stay focused. I understand there are going to be good and bad days. You just have to roll with the punches. Watching Rocky also helps too! (haha)."

"Just these 3 things: Do not let mom throw out your box of comics! You'll never fully grow into your ears so embrace them now, and when youÃ¢Â€Â™re old enough, invest in a company called Google."

"If I had to pick one it would be Eminem. Listening to him gave me my appreciation for wordplay."

"Right now, I would say Childish Gambino. The nerds must stick together (haha)"

"Aside from me? (haha) Ummm I would have to say XV. I met him a few times, He's a super talented guy and mad humble. He should be global."

One single act of kindness can go a long way, what things do you do on the daily that set you apart?

"I try to reach out to my supporters on a personal level to talk about the things we are commonly interested in, not just my music. I don't like it when artists only speak to fans when it's about their music or shows or whatever. I make sure I don't fall into that same habit."

How did it all start? Were you in front of a mirror, at a party?

"I got started in high school around the age of 15. Some friends had a studio in their basement so I would go over and kick it with them. One day I wrote a verse to a beat they had on loop and I've been hooked ever since."

What made you want to record and start rapping for people to hear you?

"I knew this was something I wanted to do after hearing friendsÃ¢Â€Â™ reactions to the verses I wrote. Brooklyn hip-hop critics are among the toughest in the world, once I saw they were into it, that's all I needed."

What was it was like growing up in New York as an emcee?

"New York is one of the best places for new music. Once you surround yourself into the music scene you come across a lot of really talented artists, I am inspired by them all the time."

"Yea, visit me any time at www.LerixMusic.com and hit me up on Twitter @lerixmusic and Facebook (FB/lerixmusic) anytime, about any topic, I'll be sure to hit you back. And thanks for all the love!"
www.lerixmusic.com 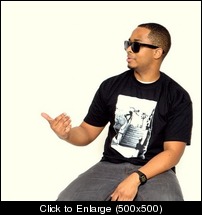