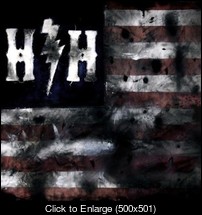 Hell or Highwater is from Orange County, California, and lead by Brandon Saller, drummer of Atreyu. Currently about to start on a tour with The Darkness, Hell or Highwater is amping up fans and newcomers alike. Dropping on February 5, with Pavement Entertainment, Begin Again is the ultimate mix to get you through Winter, and though it's originally only 11 tracks long, it includes three bonus tracks; one of which is a remix to an already amazing song. The album has everything from hard hitting anthem to the slower, still heavier rock styled ballad. First listening to it, I couldn't help but thinking about Avenged Sevenfold. The tracks held so much emotion that really reminded me of how Avenged Sevenfold was transformed after the loss of The Rev. Brandon Sallers' voice transcends the norm and includes that same kind of masterpiece. You can feel just how much of himself he throws into his music when he goes into the chorus. Then again I probably could just get the Avenged Sevenfold vibe because in the track Go Alone, M. Shadows does in fact make an appearance. The voices meld perfectly into the most amazing track to start off my year. The only thing that could make this better is if M. Shadows made an appearance on the tour. With 52 minutes full of mind-blowing vocals, ear-shattering guitar riffs, and edgy drum beats, don't be surprised if Hell Or Highwater becomes a staple in your playlist, because Begin Again gets 9 out of 10 stars from me.