How did you come up with your band name? It is actually a satellite that was launched by NASA and they watched the earth from it; like an observation system.

When, how, and where was your first show? It was at Lucy's in San Marcus and it went ok. We had just started with the two man line up at that point and it was more scary than anything else really we didn't really know if it was going to work out.

What inspires most of your lyrics? Most of the stuff that we do is along the lines of a tragedy type vibe, like a skeptical or cynical way of looking at things. We like to counteract that with poppy melodies so you could say we play poppy music with a sad under-tone of lyrics. We like to go for this because it is a nice contrast but we also like to leave some of it vague so that the listeners can draw their own conclusions from the music.

What makes you want people to listen to your music? We just want to connect to people. Say there is a show where there is only one person and you connect with that person and that means something to them, then that is what makes it all worth it. It's great to express things to other people because there are many who are feeling the same way. We think it's more important to have a song that a few connect with than a song played on mainstream radio.

Do you have any advice to starting bands? Don't do classified ads in the newspaper, don't expect to make money and expect to try out three times the amount of people that you want to have. In California it might be different but here in Texas, living in Austin, that's how it is.

Is there anything you guys would like to say to any fans reading this interview? Take a chance and listen to our music online then write us an email telling us of what you think. We have a pox box too.

Have you guys ever been on tour? We are doing that this fall. (Dates will be posted on www.bigsmilemagazine.com click on "Calendar")

What do your parents think about you both playing music? They think that its kind of expensive especially when you try to hit them up for some cash. But other than that they have been supportive. No really bad experiences

Do you guys play any other instruments than the ones that you play in the band? Tim does all the keyboard stuff on the CD but he really plays the drums in the band.

How do you mix four parts with two people at a show? We track all the keys and the bass which we record in a quick track in the studio at home, then we dump it into an ipod and when we have a show we wear head phones and then all the keys and everything just play off of the ipod it goes through a cross over. Everything you hear on the CD is reproduced live we are only two people we only have so many fingers. We try to create a big wall type sound; it's more about the layering than anything. We try to carry the sound through nice melodies. We are also doing video shows too with a projector that is on beat with us.

What do you want to see happen through music in the future? The return to people writing honest music instead of stuff that people think will sell and have more people take more of a minimalist approach. It would be nice to have a bigger variety of artists out there. As long as the direction goes towards a way of allowing people to sing along and have a connection to the music, we are happy.

Where was your best show? When we played at this dive here in town called Egos and underneath the parking garage there is a great little venue and there is always a great crowd its a very personal place to play that would be the place for one of our best shows. I don't think that we could pin doing one in particular because they have all meant something to us. Places like that are the best. It's full of cool people who just want to enjoy good music.

Do you guys believe in UFOs? I think that it's possible. It's kind of arrogant to think that you are the only one out there. There may be a higher being out there, but as far as UFO's, I am going to say no.

How did the recording go? We recorded the drums at a friend's studio here in town called The Brain Machine and then we did everything else in one of the rooms in my house. then we mixed all of it at Mixmaster here in town. That's one of the benefits of recording in your home town. You're not on such a time clock you can test different things here.

Where can we get the CD? You can download it from itunes and www.cdbaby.com and locally, here in town, it's carried at Waterloo records.

Do you guys have any advice for anyone who is thinking about making a CD? Do it at home. Take your time don't rush and try out everything you can. Practice. Practice. Practice, then practice some more. Write stuff that you are going to be proud of. You need to be a huge fan of your own songs. You have to believe in the stuff that you are putting out or else no one else is going to believe in it. 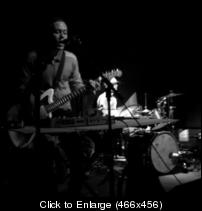